"It is a totally inclusive initiative aimed at those who want to reach an achievable target, without the pressure of competing in a serious event."

After meeting at their children’s nursery gates in the quiet village of Brockham, Surrey four years ago, Phillipa Curphey and Eleanor Lestrange were unaware that their budding friendship would lead them to utilise their passion and enthusiasm for sport and physical activity to inspire others.

Girls Alive is aimed at getting more women and girls active and helping them to become happier and healthier through the positive experience of exercise and companionship. Phillipa and Eleanor have created groups within the initiative which are encouraging, inclusive and welcoming, where women of all ages feel supported and confident enough to take their first steps into exercise without fear of judgement or competition.

One of the initiative’s primary focuses is to set up free beginner activity groups which are specifically designed to help females feel welcome and confident when participating in physical activity. Phillipa and Eleanor were made aware of GO TRI after meeting their triathlon hero, Louise Minchin, who recommended the programme as an ideal starting point for those who are new to triathlons.

With interest in triathlon sparked, it wasn’t long before social media exposed Phillipa and Eleanor to Tri January, a British Triathlon led campaign which encourages individuals and groups to swim or row, bike and run throughout January. The campaign’s welcoming and community feel attracted Phillipa and Eleanor’s interest, leading them to promote the campaign within Girls Alive.

As busy mums, the Girls Alive members incorporate their Tri January swimming, cycling and running sessions around their demanding family and work lives. 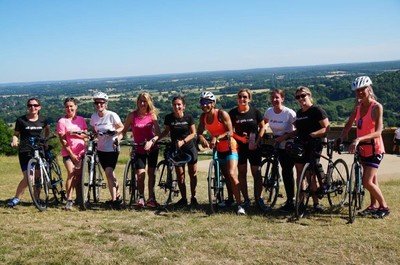 Highlighting her favourite aspects of Tri January, Phillipa said: “It is a totally inclusive initiative aimed at those who want to reach an achievable target, without the pressure of competing in a serious event. It gives you total flexibility, enabling everyone to reach their targets in their own time, pace and surroundings.”

Tri January can be completed in three distances, each led by famous faces who are encouraging participants to join their team – Team You Me and the Big C (15km); Team Bushell (20km) and Team Steadman (50km). With strong interest amongst all Tri January ambassadors, Girls Alive members have signed up to each of the three Tri January teams, providing varied challenges throughout the group. However, Mike Bushell was one notable ambassador who Girls Alive are fans of due to his can-do attitude!

Many Girls Alive members have been inspired to take on the Tri January challenge. Phillipa said: “One of our ladies, Sasha, has recently started cycling as a result of Tri January. Although a little nervous, she has come on leaps and bounds and aims to be able to cycle the 3-mile hilly Box Hill climb before the end of January. We are all really proud of her and had it not been for the Tri January challenge, she may never have got on a bike.”

Experiencing Tri January’s benefits has provided Girls Alive with the confidence to take on their first triathlon event during 2019. Despite never having taken part in regular physical activity before, Girls Alive are ongoing proof that challenges such as Tri January can vastly improve your physical and social wellbeing.

The inspirational women spoke on behalf of Girls Alive’s engaging ‘community first, exercise second’ approach, summarising why anyone who is considering signing up to the challenge should do so: “Tri January will open your eyes up to a whole new world of possibilities. Since we’ve started swimming, we’ve not only discovered swimming clubs in our local area, but we’ve discovered outdoor facilities to give open water swimming a go. We’ve made new friends through cycling and running, gained new experiences and realised that life really does begin at 40!”

If you’re inspired by Girls Alive’s story and want to share your story. Drop us an email at info@gotri.org and we'll be in touch.