Tracie Steeley is 37 years old and lives with her husband in York. As well as being a mother to her four children, Tracie keeps a keen eye out for new physical activity challenges.

Tracie decided earlier this year she would make a stand against her cancer by taking up regular physical activity. While seeking an exciting challenge for 2019, Tracie was made aware of Tri January, a British Triathlon led campaign which encourages individuals and groups to swim or row, bike and run throughout January.

With a new challenge in mind Tracie signed up with her husband, who is also passionate about taking part in sport and physical activity.

After being reminded of physical activity’s benefits since her cancer diagnosis, Tracie commented:

She added: “Having a challenge such as Tri January motivates me to get out there and push myself a little bit further. I’m proud of myself for doing something I initially thought was out of my reach.”

Tri January enables participants to complete one of the set distances throughout the month, with its adaptability and zero-pressure tone strongly appealing to Tracie. Due to her ongoing treatment, completing the unique campaign in gradual stages meant she could participate. 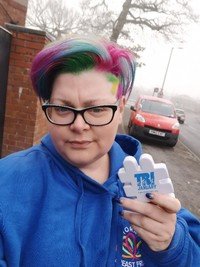 Inspired by Lauren Mahon and Deborah James, Tracie signed up to ‘Team You, Me and the Big C’ after saying to her husband: “If Deborah can do it, so can I!”

Despite previously having doubts about how much exercise she could partake in, Tracie surprised herself after managing to complete bike sprints in the gym on top of the other various gym-based running and swimming exercises.

Tracie concluded how anyone can take part in Tri January:

“You won’t know what you can achieve until you try it. My husband was sceptical about it at first, but now he has massively surprised himself after recently surpassing the 91km mark! Any one of the set distances is more than achievable when you break it down across the month.”

If you’re inspired by Tracie’s story and want to share your story. Drop us an email at info@gotri.org and we'll be in touch.