"Tri January is a superb way to instil an enjoyment of physical activity."

With data from the National Child Measurement Programme revealing St Felix had a slightly higher rate of overweight and obese pupils in Year 6 (between 2014 – 2017) than other national schools, Andi decided that change was needed. Tri January provided an opportunity to see how St Felix School would respond to extra exercise opportunities, such as walking and running sessions. Andi additionally encouraged parents to log and send in the distances their children cover on bike rides, cycling to school and during swimming lessons.

Andi spoke of an additional reason as to why St Felix School were participating in Tri January:

“January is a challenging time of the year emotionally with the short days and cold weather, so it is great to have a fantastic campaign like Tri January which provides a simplified way to take up regular physical activity.” 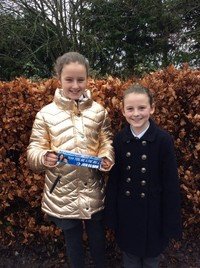 She added: “I overhear the children having conversations about the extra bike rides and family walks they have been on. It is refreshing to hear them discussing their distances rather than what level they have reached on a computer game. Tri January is a superb way to instil an enjoyment of physical activity.”

With Strictly Come Dancing star Lauren Steadman jointly-fronting the Tri January campaign, St Felix’s students signed up to ‘Team Steadman’ after being inspired by the Paratriathlon World Champion’s success on the popular BBC show. After initially aiming to complete 15km as a school, St Felix quickly exceeded this target and have surpassed a total of 100km, with participating students being awarded badges in assemblies.

However, it is not only students taking part in Tri January as St Felix’s staff actively participate in the British Triathlon led campaign. Andi wanted to ensure staff members were recognised, who act as role models for students due to their positive approach to exercise.

“Swimming, cycling and running are activities which children have access to quite easily. Not only do they support development and progress in other areas of the education curriculum; swimming correlates with water safety, cycling links to road safety and running underpins an array of team sports.”

If you’re inspired by St Felix Catholic Primary School’s story and want to share your story. Drop us an email at info@gotri.org and we'll be in touch.